Two separate 1kVdc 120A relays in one package

Dubbed DEVR10DP, it is equipped with terminal covers for both pairs of M5 female terminals, and comes in two basic types: one with both coils in parallel for simultaneous operation, and one with separate coil connections for independent or simultaneous use (see diagram). 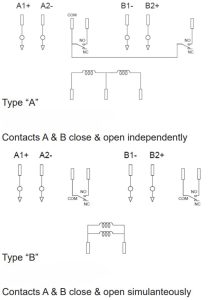 The coils are not polarised, and the second version has simplified auxiliary contact wiring.

“Each contactor inside can carry 180A for 1 minute or 140A for 10 minutes,” said Esquinazi. “This makes it possible to use the DEVR10DP as a main contactor in smaller EVs when they need to accelerate or climb hills. One time only, in an an emergency, it can break up to 600A 450Vdc.”

Pre-charge and discharge contactors are used to switch heavy resistors into the interface between a battery and motor drive to protect the main power contactors from motor controller capacitor in-rush current.

When the electric vehicle is turned off, the charge on these capacitors must be removed to protect against possible electric shock risk. “120A and 1,000Vdc can cover most actual requirements for this application where the pre-charge and discharge currents can be defined by the size of the resistors used”, said Durakool.

Polyn Technology announces the availability of NeuroVoice, an AI solution for voice processing

The Designer Handbags That Will Be Popular in 2023

These 3 Timeless Shoes Look the Chicest With Jeans

The J.Crew and Abercrombie Items That Feel Very 2023