The motor driver hardware is built into the chassis itself, they highlight, so you don’t need a separate HAT to handle the motors.

With two front wheels and one rear castor, features include buttons and status LEDs, six-zone RGB LED underlighting and a front facing ultrasound distance sensor. There’s also a camera mount (with the camera sold separately) for the vision thing. 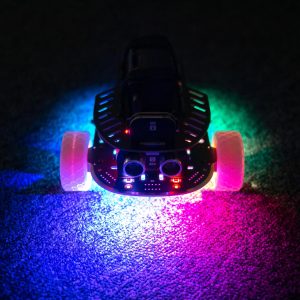 The hardware onboard supported by a Python library, with controller code and examples developed by the company’s Trilobot testing team.

The Base Kit comprises:

“Driving around a tricked out horseshoe crab on wheels is fun, but if you want to add extra functions to your Trilobot, that’s no problem. With a Raspberry Pi camera attached to the tidy built-in camera mount you can record yourself a robot’s eye view, or even add some AI/machine learning into the mix.

“It comes with an ultrasonic distance sensor so it can stop itself from bumping into things but we’ve made it easy to add more – there’s two connectors for plugging in breakouts with Qwiic or STEMMA QT connectors, and broken out headers for adding up to five sockets for Breakout Garden breakouts (requires soldering).”

You can read more about the Trilobot on the company’s website, and checkout the video below:

See also: Kitronik plugs in a Robotics Board for Raspberry Pi Pico

Samsung announces UFS 4.0 with 2x the performance in comparison to UFS 3.1

The Best J.Crew Fashion Items to Look Chic and Effortless

8 Cool Latin American Fashion Brands to Have on Your Radar

I Can’t Believe These Shockingly Pretty Shoes Are From Mango