Instead, they should have an adjustable top value and a separately adjustable bottom value: 5V and 0V, for example.

The other day, I thought of a way to modify a conventional ‘diamond buffer’ (circuit above) to produce just that effect.

I realise diamond buffers have their limitations, but at least they are fast (in modest rf terms) and have good driving capability.

All the transistors are on all the time, so there are no delays getting them out of saturation: a nice quick cheap circuit for the output of any audio or few MHz signal generator. 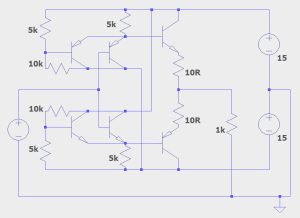 Anyway, my though was that a couple of extra emitter followers at the front end (circuit left), with variable dc voltages on their bases (5-10k potentiometers in drawing), could emitter-switch the first stage transistors, effectively limiting the amplitude of the output signal.

Emitter-switching tends also to be a nice quick clean affair, so I was hopeful.

Just in case the idea was a complete non-starter (and realising that it was not a real test 🙂 I modelled it with LTspice (thanks for keeping LTspice free ADI), and it seems to work. 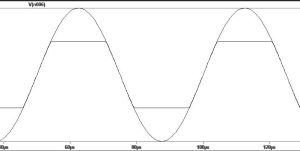 A virtual trace (right) shows nice quick clean transitions to levels set by the input potentiometers – the waveform is a sinewave in this case to show up the clean transition to level voltages.

A side-effect of all the emitter-base voltages is that the level output voltage is just about the same as the voltage set by the potentiometers.

In a real pulse generator, the idea would be to level-shift the pulses from logic level to more than the maximum amplitude needed at the output, and then use this circuit to set the output values as well as decrease the output impedance – the potentiometers could be replaced with DAC outputs.

Even with a sine and triangle generator, the circuit could be used to add safety limits to the output voltage (even a simple diamond buffer would be an improvement over some of the ham-fisted non-buffered output circuits you see on some diy function generators….

For just 5V to 1.8V logic outputs, a 5V microcontroller could provide all the control signals including the limit voltages (only the top limiter would be needed if the lower value was only ever 0V). Rails of around -2V and +7V (maybe -3 and +8V) would be sufficient to power the circuit.

There are many other ways to do something similar, but this way does not have any amplifier feedback to slow things down, and only needs six bog-standard transistors instead one or more ICs (take a look at AD8036 and AD8037 for something similar in IC form, but an extra buffer would be needed for a 50Ω output).

There are many limitations with this circuit, for example:

A note on diamond buffers

There are ways to make diamond buffers work better – by replacing the driver stage resistors with constant current sources, for example.

As audio amplifiers – for example as headphone drivers – people claim excellent performance for optimised variants of the diamond circuit, with distortion under 0.1% – do a web search and you will find plenty of improved examples.

BTW, I cannot see a way to re-draw the circuit to make it particularly diamond-like.

38 Fall Finds I’m Buying For My Wardrobe and Apartment

The Best J.Crew Fashion Items to Look Chic and Effortless

8 Cool Latin American Fashion Brands to Have on Your Radar